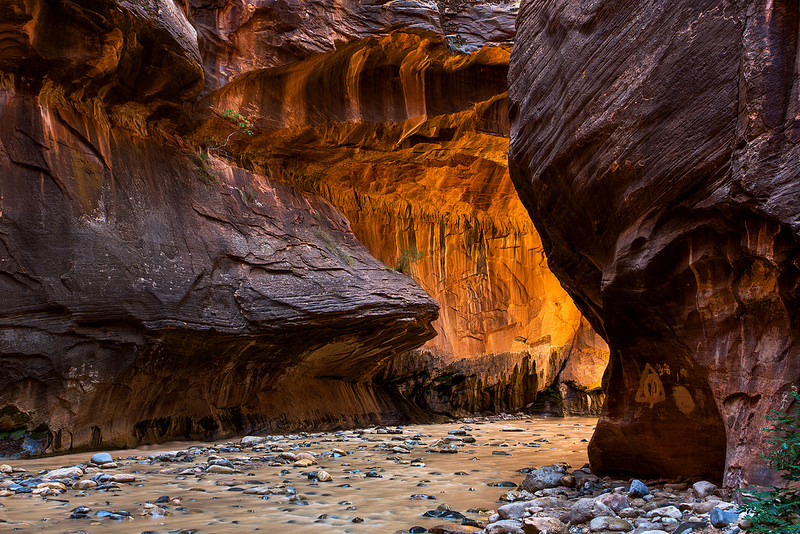 My wakeup in St. George was the earliest of the trip so far:  4am.  I wanted to be sure to make it to Zion National Park in time to catch the first shuttle into the valley.  Years ago traffic congestion at Zion reached the point where they banned cars in the valley and started a shuttle service instead, and the first shuttle that morning left the Visitor Center at 6am.  I made it with plenty of time to spare.  A hint of light appeared in the east as we rode through the valley and the silhouettes of Zion’s massive rock walls gradually became visible against the dark blue sky.

The last shuttle stop is at the Temple of Sinawava, where the mile-long Riverside Walk trail leads to the start of the Narrows, one of my favorite hikes in the world.  There is no trail in the Narrows.  Most of the time you’re walking in the Virgin River itself, with towering, almost vertical sandstone walls rising impossibly high on both sides.

Eager to get far out in front of the handful of other hikers, I bounded off the shuttle and practically bumped into a warning sign blocking the trail:  FLASH FLOODING IMMINENT / NARROWS CLOSED TO ENTRY.

Crap!  There had been a lot of rain yesterday, and storms in any upstream area that feeds the Virgin River create a risk of flash floods.  It was now bright enough for me to notice that the river water was solid brown with muddy runoff, another warning sign.

But the rain had stopped and the river looked as calm as usual.  I decided to walk to the start of the Narrows and make a decision there.  I suspected the “Narrows Closed” sign was left over from yesterday, when it had definitely been raining, but there was no way to be sure.  More concerning was the muddy water.  Not being able to see what I was stepping on would make it tougher to hike in the rocky river without taking a spill, and substituting cocoa-colored water for blue would detract from photos.  Given that I planned to camp in Zion that night and spend the next day there as well, I decided to just wait a day and try the Narrows again tomorrow.

I took the shuttle back to the Visitor Center and stopped at the information desk.  “Do you think the Narrows will be open tomorrow?” I asked a park ranger.

The ranger adopted a look of bemused tolerance.  “The Narrows is never closed,” he said with a laugh.

I tried to suppress my smugness as I pulled out my phone and showed him a photo of the sign that said the Narrows was closed.  “As of 40 minutes ago this sign was in front of the trail to the Narrows,” I said in as flat a tone of voice as possible.

“Might the river water clear up by tomorrow?” I asked.

Well alright then.  From the Visitor Center I drove to the eastern part of the park along the Zion – Mount Carmel highway to check on my favorite tree, a small pine that has somehow managed to grow from the top of a sandstone formation.  It looked almost exactly the same as it did in 2005 and 2011.

Along the way I stopped to watch groups of bighorn sheep, some resting high up in the craggy orange rocks, others grazing near the highway.

That afternoon I set up my tent at the Watchman campground.  I hadn’t been there long when my friend from work Alicia and her boyfriend Zack stopped by.  A few weeks ago we realized we’d be camping in Zion at the same time and had planned to say hello.  Alicia and Zack had just been to Havasupai, one of the most incredible places in the West, and I was looking forward to hearing about it.  “How was Havasu?” I asked.

“Well, we got engaged,” Alicia said, showing me her ring.

Whoa, big news!  I congratulated them and heard about the rest of their trip, and they kindly invited me over to their campsite for dinner that night.  The meal they prepared was far more impressive and elaborate than anything I’ve ever cooked while camping:  fire-grilled steaks, broccoli and beans.  Everything tasted great, and I was really happy we were able hang out for a little while.  Thanks and congratulations again, Alicia and Zack!

The first shuttle bus into the valley the next morning was more crowded than it had been the previous day, but by the time we arrived at the Temple of Sinawava there were only about five other hikers left.  I took off immediately on the Riverside Walk trail, noticing with disappointment that the Virgin River was almost as muddy as it had been the day before.

I reached the end of the Riverside Walk well ahead of the others, grabbed a walking stick, and started into the Narrows.  The muddy water did make it a little more difficult to be sure of my footing, but it wasn’t a big problem and I loved having the entire place to myself.  The sun hadn’t risen yet and small bats fluttered by as they hunted for insects over the dark surface of the river.

Gradually the sun lit the very top of the canyon walls.  I began stopping for photos, but still moved quickly enough to stay well in front of other hikers.

The opaque water made it much trickier to assess the river’s depth at any given point.  In several spots the water quickly jumped to my chest, and I had to be careful to keep my camera backpack dry.  On previous visits to the Narrows I’d known it was time to turn back when the only way to continue was to swim, and – with clear water – it was relatively easy to know when I’d reached that point.  But this time the only way to know the water’s depth was to walk out into it.

First I tried the right side, but the water was deep and I sank alarmingly quickly in soft mud, so thick that I almost lost my Keen sandals.  Next I tried the left side, but the water rose to my neck almost immediately and showed no signs of leveling out.  That left the boulder.  The water in front of the boulder was only chest-high, and I was able to get a handhold and pull myself up.  The other side of the boulder, unfortunately, was relatively smooth, and I couldn’t see a way to lower myself down gradually.  I’d have to slide.  If the water on the other side was relatively shallow, I’d be fine.  But if the water was deep, I’d be in over my head before I could stop myself.

I left my backpack and tripod on top of the boulder, took a deep breath, and slid down the other side.  The water was deep.  I plunged at least a foot under the surface and still didn’t touch bottom.  The current quickly pushed me up against the rock, and with no handholds to grab I could only slide awkwardly along the edge until I was back where I began.

Ha!  I was completely soaked.  Thankfully the other hikers hadn’t caught up yet so there were no witnesses.  I scrambled up on the boulder again to wring out my clothes and retrieve my backpack.  And then, admitting defeat, I started the hike back.

For photos in the Narrows it’s best to catch reflected sunlight, which can cause the sandstone to glow in amazing hues of yellow and orange.  On my way back the sun began reaching deep enough into the canyon to set up some nice shots.

I began running into other people and soon the river was crowded with hikers, making me even more grateful that I was able to experience it alone for hours.