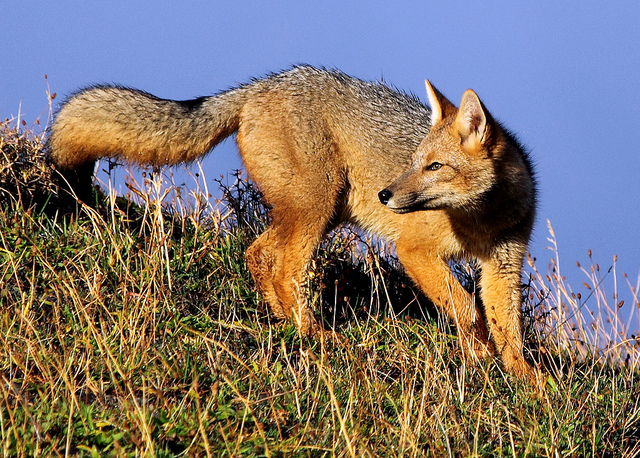 In April the sun rises late in Patagonia.  When my alarm went off at 6:30am there wasn’t even the slightest hint of light in the sky.  I ate breakfast quickly and hit the trail as soon as I could see well enough to avoid stepping in mud puddles.  As usual it had rained during the night.

I hiked for half an hour before the sun finally dragged itself above the horizon.  Almirante Nieto, the tallest peak of the Paine massif, loomed above me, and a rainbow emerged in some of the clouds that had lingered from the night.

The mild weather surprised me.  Anticipating arctic air I’d wrapped myself in the multiple layers that compensated for my lack of a heavy jacket, and as soon as I began hiking uphill I started to sweat.  Not long after sunrise I stuffed my fleece jacket and long-sleeved shirts into my backpack and continued in just a T-shirt and trekking pants.

I was hiking from the Hosteria Las Torres to a viewpoint at a small lake below the Torres del Paine, the park’s most famous granite peaks.  It was only nine kilometers each way, climbing from an elevation of 135m at the hotel to 886m at the viewpoint.  In my backpack I carried my camera, a second lens, a small bottle of water, two Diet Cokes, a bag of peanuts, and a pack of chocolate chip cookies.

One hour into the hike I approached an area that my map marked with a symbol of blowing wind.  Given that the wind had been uncharacteristically calm so far that morning, I didn’t put much stock in the warning, and I was caught off guard when after rounding a corner I was almost blown off my feet.

I should have known better.  At dinner the night before, a talkative American in his 50s had held forth about “the big accident” he’d seen on the trail to Torres del Paine.  Apparently a hiker had lost her balance, and a Chilean guide who stepped forward to help her was hit with a gust of wind that shoved him over the edge of a steep slope.  He fell almost 30 meters and lay unconscious for 10 minutes.  A rescue team had to carry him down the mountain on a stretcher.

At the moment my biggest concern with the wind was that it prevented me from holding my camera steady.  Another rainbow had just appeared and I wanted to get a good shot.  I found some stability by crouching behind a small boulder.

The temptation to anthropomorphize the Patagonian wind was irresistible.  It acted mischievously.  It didn’t follow the rules.  Sometimes it gusted powerfully one way, stopped dead still for several seconds, and then gusted just as powerfully in the opposite direction.  It toyed with you, a cat with a mouse.

Wind on the Trail to Torres del Paine (Video)
The trail was so well marked it seemed impossible anyone might lose it.  And yet I somehow found a way.  After about two hours the trail appeared to split, with one branch continuing forward and the other crossing a bridge to a campsite on the right.  I continued forward, oblivious to the fact that with each step the false trail was rapidly deteriorating into a boggy marsh.  Only when both my feet sank into icy water did I realize my mistake.

I backtracked to the real trail, crossed the bridge, and stopped to wring out my socks at a small stream just past the campsite.  I’d entered a forest and for the next hour I was surrounded by changing leaves, some still green, others turning from yellow to orange to red, a complete range of intense fall colors.  Under direct sunlight the entire forest seemed to glow from within.

The final climb to the viewpoint led up a steep boulder-covered slope.  Only the very tops of the Torres del Paine were visible until I reached the other side of the boulder field, where a full view of the granite peaks appeared so abruptly I felt as if a curtain had dropped.  A faint rainbow curved into the pale green lake at the foot of the towers.
I’d left well before most of the other hikers at the Hosteria Las Torres, and everyone who’d camped on the mountain seemed to be heading down instead of up.  For more than an hour I had the area around the viewpoint entirely to myself.  A cold wind blew off the glacier-fed lake, and even re-bundled in multiple layers I quickly went from sweating to shivering.

The clouds covering the peaks occasionally retreated, offering a beautiful clear view of the towers.  I boulder-hopped along the edge of the lake.  The light changed dramatically as different combinations of sun and clouds played out over the scene.

Realizing I hadn’t touched any of the food or drinks I’d brought, I sat in the shelter of a boulder and drank a Diet Coke.  I didn’t feel hungry and never touched the food.  Other people began to show up and I took that as my cue to leave.  The hike back down was quick and easy.

My luck with the weather was too good to last.  The next morning I woke to the sound of rain.  The temperature had dropped significantly.  I went out for photos of the hotel and managed to get a few shots during breaks in the rain.
At breakfast I stared at the grey sky and tried to decide if I wanted to take another hike.  I needed to be back at Laguna Amarga by 2:30pm, so there wasn’t enough time to return to the Torres del Paine viewpoint, and I’d been told that the only other trail leading away from the hotel was relatively boring for the first four or five hours.

At that point a family of five foxes appeared on the hotel grounds.  They were used to people and let me approach very close.  That settled my itinerary for the morning – I spent almost two hours following the family as it wandered around the area, resting, playing and hunting.  At sunrise a small opening in the clouds briefly covered the foxes in yellow morning light.