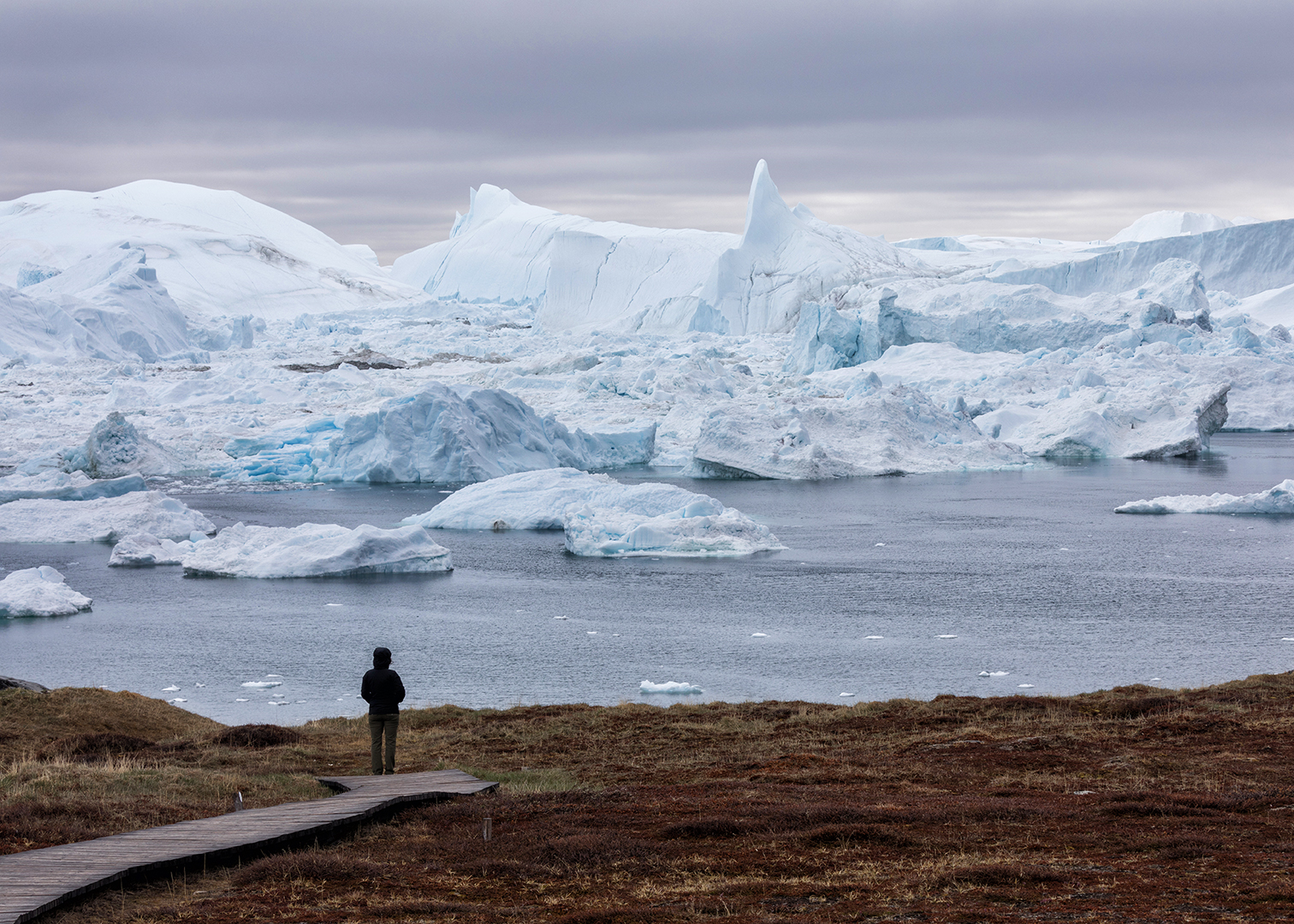 If you like extreme landscapes, your first view of the Ilulissat icefjord is epic.  It’s almost impossible to wrap your head around the scale of the place.  Gigantic icebergs chaotically grind together in a seemingly endless mass of frozen slopes and shelves and crags that extend as far as the eye can see.  The iceberg that sunk the Titanic is thought to have originated from this area, possibly even from the Jakobshavn Glacier (Sermeq Kujalleq) that feeds the Ilulissat icefjord.

Home to fewer than 5,000 people, Ilulissat still ranks as Greenland’s third largest city.  The area has been inhabited for over 4,000 years, which is remarkable when you consider the unforgiving weather and barren terrain.  It took folks much tougher than I am to figure out how to fish and hunt and stay warm enough to survive in such a harsh environment.

Marie and I wanted to head straight to the icefjord as soon as we arrived, but our first order of business was to rush to one of Ilulissat’s few clothing stores before it closed.  I’d foolishly agreed to check my small roller bag for our flight from Iceland, and that bag – which had my warm hat, warm jacket, rain jacket, and all the other clothes I didn’t wear on the plane – never made it to Greenland.  “Ka-kaw!” I said to Marie, acknowledging yet another gut-punch from the bird-curse we’d inadvertently triggered in Iceland.

Unsure when or if I’d ever see my bag again, at the very least I needed to buy a waterproof jacket (it started snowing in Ilulissat soon after we arrived) and a toothbrush.  We were lucky enough to find a jacket that fit, and the brand – Jack Wolfskin – made us laugh because we’d first been exposed to it in Mongolia, when we slept in Jack Wolfskin sleeping bags that seemed comically shoddy.

Successfully geared up, Marie and I walked to the icefjord along a road where hundreds of sled dogs were chained up for their summer break.  Ilulissat apparently has as many sled dogs as people.  We’d read that we weren’t supposed to pet the adult dogs, but thankfully it was OK to say hello to any of the puppies that happened to wander over.

Before starting out on the boardwalk we stopped to check out the relatively new Icefjord Visitor Centre, a building with unique, modern architecture that somehow seems like a perfect fit for the landscape.  The icefjord was declared a UNESCO World Heritage site in 2004 and the visitor center opened in 2021.

From the visitor center we walked down the boardwalk, which eventually gives way to a stony trail that offers a southern-looking view of the icefjord.  The cloudy sky was actually good for photos, drawing from the icebergs an amazing range of blue tones that I don’t have the vocabulary to describe with any justice.

“I’m sorry!” I yelled at passing seagulls, hoping that my sincere contrition might prompt the birds to reconsider the severity of their curse.  Messing up our travel plans was one thing, but unleashing historic flooding in Yellowstone seemed like disproportionate punishment.

We woke up the next morning to a beautifully clear sky.  All day we experienced the best weather of our entire trip, and we took advantage of it with two visits to the icefjord and a late evening boat ride to see icebergs under the surprisingly bright light of the midnight sun.  Our time in Ilulissat coincided with the summer solstice, which meant that the sun never set while we were there.

From the roof of our hotel we watched the Arctic Umiaq ferry arrive in Ilulissat.  If our flight to Nuuk hadn’t been cancelled we would have been aboard that ferry, and I really wish we could have spent a couple of days seeing Greenland’s western coastline.

We headed to the airport on what we thought was our last day in Ilulissat only to have our flight back to Iceland delayed, delayed some more, and then cancelled.  Ka-kaw!  There were no other flights out that day, and the Icelandair representative said all the hotels were sold out.  At one point it sounded like we might have to sleep at a local school, but Marie noticed on Expedia that a room had just opened up at the same hotel we’d been staying at, so we grabbed it.

The next morning Icelandair informed us that they’d rebooked us on a flight the following day, but that meant we’d miss our flight to Dublin.  Thankfully we were able to switch to a flight leaving that night, and we took advantage of our extra time in Ilulissat by heading out on the bay to look for whales.  The whales eluded us, but it was great to get another close look at the icefjord.  Our guide provided heavy-duty jumpsuits to help with the cold, but the wind was so strong at the front of his small, uncovered boat that we came back half-frozen.

Our plane actually did take off that night, but we didn’t arrive in Reykjavik until 2am.  Our flight to Dublin was scheduled to leave at 6am, so we settled for a couple hours of fitful sleep on an airport bench.  I woke up with a sore throat and figured it was probably caused by the cold air on our recent boat ride, but somewhere in the back of my mind I could hear a faint “Ka-kaw!” and should have been more suspicious.

Marie had been to Ireland before but it was my first time, and we enjoyed walking around Dublin.  We stayed in the touristy Temple Bar area, which seemed a little like visiting San Francisco and staying at Fisherman’s Wharf.  Our only real activity was to take the Guinness Brewery tour, where the highlight was drinking our end-of-tour beer while admiring the views from the rooftop bar.  More and more I’m finding it tough to appreciate big cities.

From Dublin we flew back to Reykjavik, where we stopped by the Icelandair baggage claim area to ask about my lost bag.  “Um, it’s right there,” said Marie, pointing to a line of bags against a wall.  Sure enough!  My bag still had the bar-coded tag they attached when I checked it (along with my name and phone number), so it will remain a mystery why Icelandair kept claiming to have no idea where it was.  Still, what a relief to get my bag back, and how amazing to finally change into clean clothes after wearing the same stuff for a full week.

My sore throat hadn’t gone away, and Marie mentioned that she had one too.  By the time we boarded our flight back to Denver we both felt pretty miserable.  We initially thought we’d probably just picked up a cold, but we started wondering if we’d finally caught COVID.  We warned my mom, who was set to pick us up from the airport, but she feels strongly that it’s (well past) time to get on with normal life again and wants nothing to do with masks or precautions.

Marie and I both wore masks in the car, and back at my mom’s place we took a rapid COVID test.  Marie’s result came back positive and mine was negative.  (What a close call – had the United States not recently dropped its COVID testing requirement for citizens returning from overseas, a positive result would have stranded us in Iceland for at least another 5 days.)  Marie and I felt pretty sure we were sick with the same thing, likely meaning it was a false positive for Marie or a false negative for me.  Still, that was more than enough for us to worry about passing along whatever we had to my mom.  We’d planned to stay in Denver another day, but instead we left first thing in the morning and drove straight back to our place in Silver Gate to isolate.

It had been a roller-coaster trip, with incredible highs and frustrating lows.  Before the trip began I’d been describing our itinerary as “fragile,” meaning that a problem with one part could pretty easily mess up other parts.  And that’s exactly what happened.  Marie and I tried to figure out what lessons we should learn from all of our mishaps, but we kept coming back to the idea that sometimes you just have bad luck.  How can you plan for a scenario where you accidentally provoke an Icelandic bird-curse?  Mostly, we decided, this trip was a reminder that one of the most important travel skills is being good at rolling with the punches.