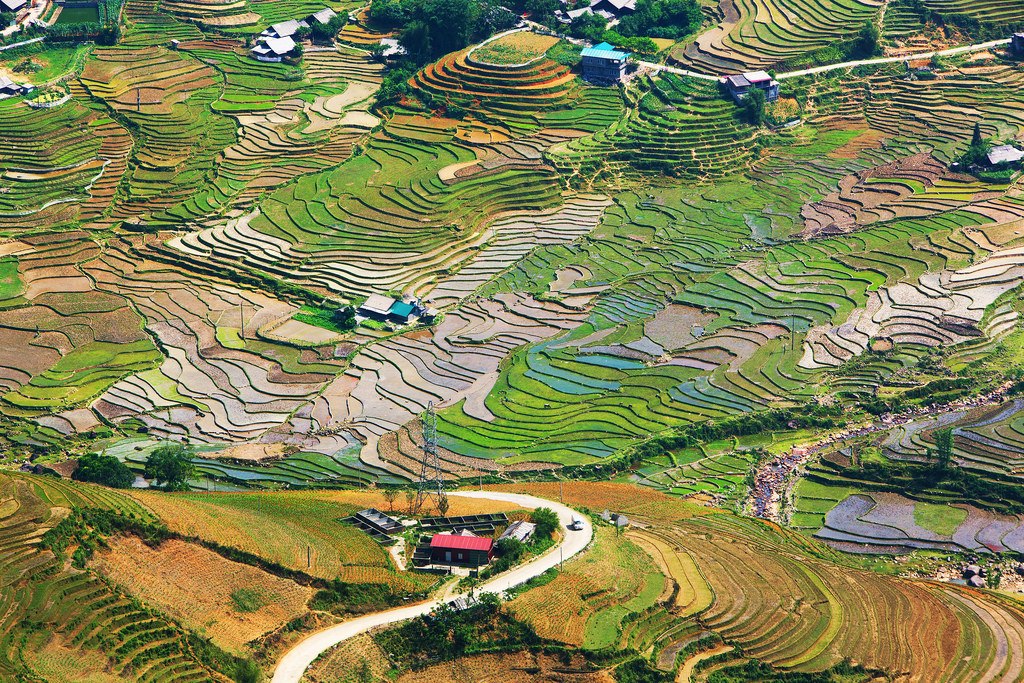 When I visited Sapa in 2010 I brought my Hmong friends prints of the photos I’d taken of them in 2006.  Some of the other Hmong women heard I’d done that, which prompted a couple of them to stop me on the street and say, “In four year you bring me photo, yes?”  I was more than happy to oblige.

Now in 2016 I’d arrived in Sapa with the prints I’d promised.  I just needed to locate the two women.  On my first day in town I showed the photos to a group of Black Hmong, who recognized the women but said they weren’t in Sapa that day.  When I tried again later a Hmong woman pointed to one of the photos and said, “That me!”

She’s changed quite a bit, I thought, as I handed over the photo and reminded her that she’d asked for it five years ago.  “No,” the woman laughed.  “That no me.  I just having a funny.”

Finally I did track down the two women – Sho Sho and Mama Ti.  Both claimed they remembered asking for a photo and seemed to get a kick out of the fact that I’d actually delivered.  Mama Ti – whose gold teeth have been replaced by dentures – gave me a hug and insisted that I accept a couple of bracelets she’d made.

I wanted to go on at least one long hike in Sapa, and Ge and Ya kindly volunteered to take me trekking.  “We go to place you no go before,” said Ge.

The three of us set out on my third morning in Sapa.  After passing through the eastern side of town we climbed a steep path up into the mountains and then looped around a village called Hau Thao.  The views were amazing, and it was great to catch up with Ge and Ya.

I asked Ge and Ya if they planned to live in Sapa for a long time, and they said that at some point they’ll move back to Lao Chai – the village their husbands are from – to farm.

“It OK,” Ge said unenthusiastically, and went on to explain why they wouldn’t have much of a choice.  For one thing, everyone in their community eventually ends up farming in a village, so there’s cultural pressure.  But on top of that they expect that Vietnam will soon force Sapa trekking guides to be licensed, which means the government will also start collecting taxes on trekking income.  Ge and Ya weren’t optimistic that they’d be able to earn enough to stay in Sapa.

The next night I was invited to a big group dinner prepared by all the Hmong women and hosted in Ge’s room.  Counting all the women, husbands, kids, and other relatives, there were over 20 of us circled around two large hot pots and a huge variety of food.  One of the husbands brought a home-made bottle of apple rice wine – its alcohol content closer to vodka – and I joined all the men in rounds of shots until the bottle was empty.  “Why aren’t the women drinking?” I asked.

With that, one of the husbands made a run to the market and returned with cans of Hanoi beer.  The Hmong women checked to make sure the rice wine hadn’t hit me too hard, and I reassured them I was fine.  Some of the husbands, however, who were all shorter and weighed less than me, seemed to be approaching their limit.  “Do we want one more round?” I asked as soon as we’d finished our beers.  “I can go to the market.”

The husbands happily agreed, but they insisted that one of them make the run instead.  “Cheaper for us,” Chu said.

Ge discreetly let me know we should stop after that round.  One of the men, who’d joined us in the middle of dinner, wasn’t good with alcohol, she said.  And the women were starting to worry that their husbands would have a tough time getting up for work the next morning.

Some of the husbands, however, were pushing for the men – including me – to hit a karaoke bar.  Ha!  There’s no question it would have been a memorable experience, but there were too many downsides.  I’d probably get blamed if the husbands overdid it, none of the men spoke enough English for us to communicate, and I wanted to have a beer with the wives.  So the karaoke push fizzled.  Ge, Ya, and Chang agreed to join me for a drink, and Ge sent someone for more beer.  We moved to Ya’s room for our final round, which – despite my protests – turned into one more final round.

It had been a great night.  Vi complained that the next morning her husband smelled like alcohol and was almost late to work, but other than that we all seemed to have survived the evening unscathed.