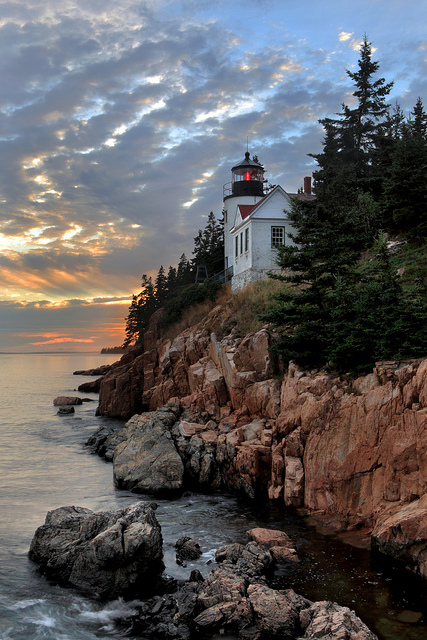 I picked up my buddy Phil and his seven-year-old son Sam at the Boston airport.  Phil’s wife Cathy, unfortunately, had to stay back in the Bay Area, but the rest of Phil’s extended family – all 21 of them – had already gathered at their house on Swan’s Island off the coast of Maine.

Over the years I’d heard a lot from Phil about Swan’s Island.  It’s small – just 14 square miles of land – and the year-round population is only a few hundred (although the number of residents triples during the summer).  The island’s primary source of income is lobster fishing, and thousands of multi-colored buoys attached to lobster traps float in the surrounding water.  Acadia National Park is just six miles to the north.

Phil’s family has had a house on Swan’s Island for many years.  They meet there almost every summer, and this year’s group included Phil’s mom and step-dad, his sister Jill and her family, his brothers Eric and Jeff and their families, and four dogs – a Golden Retriever, a yellow Lab, and two chocolate Labs.  It was a full house, and I really appreciated the family’s willingness to make room for one more.

At Bass Harbor we left my car and boarded a ferry for the short ride to the island.  Some of Phil’s nieces and nephews picked us up at the dock and took us to the house, which was right on the water.  Rain kept us inside that afternoon, but the weather improved the next morning and Phil gave me a tour of the island.  We stopped by the lighthouse, picked raspberries and blueberries with some of the kids, and went swimming at the old quarry.  Later we took boats out on the water and stopped at Hat Island for a short hike.

The next morning we motored over to Stonington for breakfast.  Stonington is a small seaport, half fishing town and half tourist destination, on Penobscot Bay.  After breakfast we passed the Mattie Belle, a lobster boat that Eric said was owned by Linda Greenlaw, the fishing captain portrayed by Mary Elizabeth Mastrantonio in the movie The Perfect Storm.
At mid-day I said goodbye to Phil and his family and rode the ferry back to Bass Harbor.  A year of solo travel had atrophied my conversational skills, which weren’t exactly world-class to begin with, but Phil’s family had been kind enough to take it easy on me and I genuinely enjoyed getting to know them. I can’t thank them enough for the generous hospitality.

I spent the afternoon exploring Acadia National Park and camped that night just a short walk away from the Bass Harbor Head Lighthouse.  The mosquitoes were brutal – no fewer than 20 buzzed constantly around my head – but I stood my ground on the rocks below the lighthouse long enough to take a few sunset shots.

One thought on “Swan’s Island and Acadia National Park, Maine”