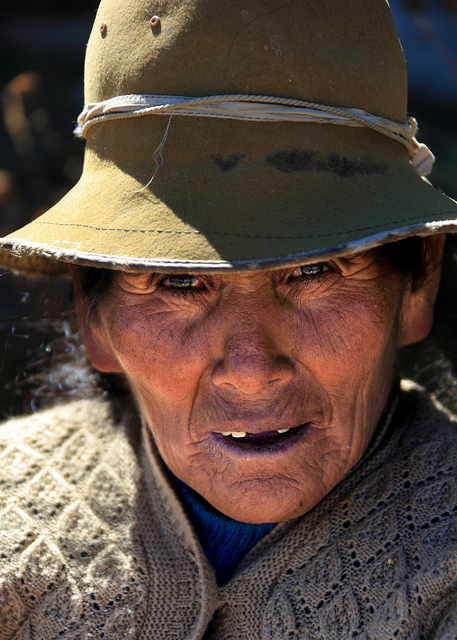 I began to wonder if I should have been a little more selective when I bought my bus ticket.  A variety of companies offered service from Sucre to La Paz, and all the other tourists seemed to be getting on a different bus.  Their bus, so clean it almost glowed, looked as nice as any bus I’d taken in Argentina or Chile.  My bus, when it finally sputtered into the terminal, looked more stereotypically Latin American.  A variety of unusual odors greeted me when I climbed on board.

We left at 7:30pm.  The bus was so cold that I wore two jackets and huddled under a wool blanket.  Sleeping on a bus is not easy, even when it’s comfortably warm.  Sleeping on an unheated bus in near-freezing temperatures is particularly difficult, and I was tired and loopy when we arrived in La Paz at 7:00 the next morning.

I found a hotel and then spent the afternoon walking around the city.  The next day, feeling pressure to do something cultural, I went to the Museo Nacional del Arte, the first art museum I’d visited on this entire trip.  Medieval religious paintings and modern abstract art don’t do anything for me, but I enjoyed some of the exhibits from the mid-20th century, especially the Luis Zilveti paintings and the Maria Nuñez del Prado sculptures.

The next morning I made the relatively short trip to Copacabana, a small, touristy city on the southern shore of Lake Titicaca.  Two hours into the ride we reached the edge of the lake, and our driver announced that we all needed to get off the bus so that it could be rolled onto an old barge and ferried across a narrow channel.  Copacabana isn’t on an island, but by cutting across the water we were able to take a much more direct route.  The rest of the passengers and I followed the bus in a creaky wooden motorboat.
Traveling in Bolivia is half as expensive as Argentina or Chile.  The bus ride from La Paz to Copacabana cost $5.  In Copacabana I paid $15 for a relatively nice, clean hotel room with wi-fi, cable TV, and an excellent view of Lake Titicaca.  For lunch I stopped at a food tent by the side of the lake and had a plate of freshly-caught trout for $3.

That afternoon I hiked up a hill overlooking the city and took photos as the sun set.  The climb took less than 30 minutes, but in the thin air at 3,966 meters (13,012 feet) I was gasping for breath by the time I reached the top of Cerro Calvario.

Titicaca is the world’s largest high-altitude lake.  It covers 8,400 square kilometers at an elevation of 3,808 meters (12,493 feet) above sea level.  The sapphire-blue lake was sacred to the Incas.  According to Incan mythology, Isla del Sol – an island just north of Copacabana – is the birthplace of the sun.

For less than $4 I booked a boat trip to Isla del Sol that left first thing in the morning and returned to Copacabana in the late afternoon.  Our slow-moving motorboat took almost two hours to reach the small Isla del Sol town of Cha’llapampa, and from there I hiked south along the spine of the island, passing several Inca ruins on my way to the village of Yumani, our pick-up point.

Near the start of the hike a local woman with a clipboard told me I needed to buy a ticket for the trail.  The ticket only cost $1.50 and I didn’t think much of it.  Forty-five minutes later I reached a small hut where a local man told me I had to buy a ticket if I wanted to continue.  “I already bought a ticket,” I told him.

“That ticket was for the north part of the island,” he said in Spanish.  “This ticket is for the south.”

It annoyed me to be nickel-and-dimed, but the man assured me I wouldn’t need to buy any more tickets.  An hour later I reached another ticket booth.  “¿En serio?” (Seriously?), I asked.  The ticket-seller nodded gravely and then weathered my first-ever attempt at a Spanish-language mini-rant.

In Southeast Asia I enjoyed taking photos of people in the street, but in Africa and South America very few people let me take their photo without demanding payment.  I understand that it must be annoying for locals in touristy places to constantly get photo requests and I don’t blame them for wanting something in return, but paying for a photo feels wrong to me.  As a result I’ve almost completely stopped trying to photograph strangers.

I made an exception on Isla del Sol when I came across a local girl standing next to the trail.  “¿Puedo sacar su foto?” (Can I take your photo?) I asked while pointing to my camera.  She didn’t object so I took a few shots.  Seconds later the girl’s mom appeared, holding out her hand and yelling what I guessed was the Aymara word for money.  Given that I was stuck paying already, I asked the mother if I could take her photo too.  When we were done I handed over all the change in my pocket, but the mother scowled and signaled that it wasn’t enough.  I remembered why I’d stopped photographing strangers.

When I arrived at Yumani I felt like I’d been transported to a Grateful Dead concert in the early 1990s.  Half the tourists milling around were neo-hippies, complete with drums, dreadlocks, tambourines, and even a hula-hoop that could be disassembled into four plastic tubes.  An American hippie couple trying to sell homemade jewelry had a young child with them.  The kid seemed to be having a blast, but I couldn’t help but picture him in a psychiatrist’s office twenty years from now.
Back in Copacabana I began figuring out my plan for crossing over to Peru.  I’d hear rumors that a group of striking Peruvian miners had blocked the border roads around Lake Titicaca, and one of the local tour agencies confirmed that all the bus routes from Copacabana to Peru were shut down.  The agency said the only way to get to Peru was to take a boat to Puno.  A cruise on the lake sounded better than being stuck indefinitely in Copacabana, so I bought a ticket.  That night I climbed back up Cerro Calvario to watch my last sunset in Bolivia.