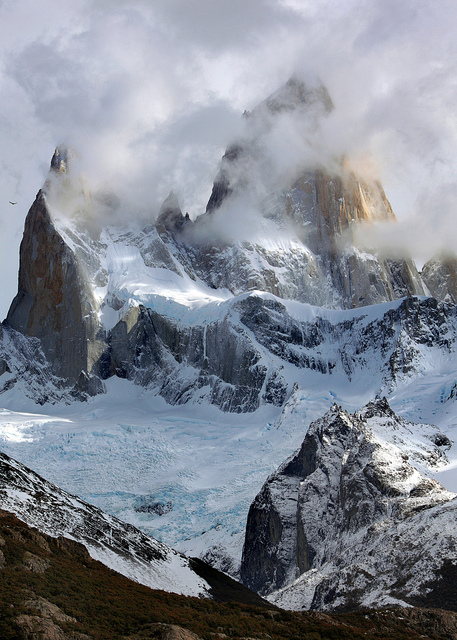 In 1901, Robert Parker and Harry Longabaugh – better known as Butch Cassidy and the Sundance Kid – fled from the United States to a small cabin near the Patagonian town of Cholila, south of Bariloche.  They’d heard Argentina still offered the kind of anything-goes lawlessness that had all but vanished from the American West.  Butch and Sundance spent five years in Patagonia.  They tried their hand at ranching but inevitably returned to what they knew best:  robbing banks.  The Pinkerton detectives sent to arrest them never succeeded.

It was easy to imagine the legendary outlaws riding through the desert plains outside the window of my bus.  The scene couldn’t have changed much over the past hundred years.  The only buildings we passed were primitive wooden huts, and the road was unpaved.

We arrived in El Chaltén well after sunset, but even in the dark we could see that it was tiny.  Our bus drove from one side of town to the other in five minutes.  El Chaltén is often described as “Argentina’s trekking capital,” and yet it still hadn’t grown large enough to have an ATM.  The entire town sits within the borders of Parque Nacional Los Glaciares, which runs from El Chaltén down past El Calafate and encompasses almost 5,000 square kilometers.

In the morning I asked a clerk at my hotel where I could find the trail to Fitz Roy, one of Patagonia’s most iconic mountains.  “Turn left out the door and go three blocks,” he said.  Three blocks!  My hotel basically sat at the foot of one of Argentina’s best treks.

The sky that morning was cloudy and gray.  I considered waiting for better weather to start my hike, but at breakfast a fellow traveler put things in perspective:  “I’ve been here for four days and this is the best weather I’ve seen,” he told me.  So I bundled up and started walking.  The trail immediately gained elevation and within thirty minutes I had great views of the Río de las Vueltas.

Hiking another forty minutes through a snow-covered forest took me to the first Fitz Roy viewpoint.  Low clouds completely hid the famous mountain.  But the trees had begun to take on their fall colors and even under an oppressive sky the area was beautiful.  I felt physical pain as I imagined how incredible the photo opportunities would have been if Fitz Roy was visible.
I waited patiently, shivering on a wind-exposed hill, but the clouds looked as if they’d settled in for a long stay.  There were signs of blue sky back the way I came, so I returned to the Río de las Vueltas overlooks.
It appeared as if conditions might have improved around Fitz Roy, so I hiked back up.  No luck – clouds still completely covered the mountain.
The weather continued to deteriorate, so I returned to my warm, dry hotel.  The forecast for the next day looked hopeful and I woke to a mostly clear sky.  Wasting no time on breakfast I grabbed a pack of Oreos and hit the trail.
The scene at the Fitz Roy viewpoint had been transformed.  In the excitement of my first glimpse I thought I could see the entire mountain, but the elusive main peak remained partially veiled by the clouds.
I waited.  The clouds seemed to be gradually receding.  I explored more of the area around the viewpoint and found an angle that let me line up the river valley, orange and red with turning leaves, under the still-shrouded Fitz Roy massif.
Panorama of Fitz Roy (Video)
The mountain teased me all afternoon.  Just when I thought it was about to reveal itself the clouds dropped down again.  A passing hiker asked if I was going to Laguna de los Tres, another two or three hours up the trail.  “I can’t,” I said.  “As soon as I leave here, the sky is going to clear up.”  But it never did.  At about 4pm all signs of Fitz Roy vanished behind a gray wall.

I was disappointed that I never had a completely clear view of the mountain, but I came very close, and I loved being able to sit back and watch different clouds and light play out over such an amazing landscape.  Staying in one place also gave me chance to take some less-obvious photos – a sparrow landing on a nearby branch, a sunbeam selectively lighting up a glacier, a twisted tree with yellow-orange leaves hanging over the edge of the river valley.

On the walk back down to El Chaltén I literally stumbled into my best wildlife encounter of the day.  The trail was rocky and I had my eyes on the ground to avoid tripping.  I didn’t hear the loud knocking noise until I was just two feet away from an adult male Magellanic woodpecker jackhammering his beak against a dead tree that bordered the trail.

I assumed my sudden intrusion would scare him off, but far from it – the surprisingly large bird just flashed me an angry look and continued about his business.  I had more than enough time to pull out my big camera for a full round of photos and videos.   A second male stood nearby (an almost-grown son, I guessed, given that when the adult male dug out a fat white grub he fed it to the second male), and soon I heard a female squawking from the branches above.

Magellanic Woodpecker Working on a Dead Tree (Video)
I may not have made it very far along the trail, and Fitz Roy refused to show me everything it had, but rarely had I spent a day in a more beautiful place.