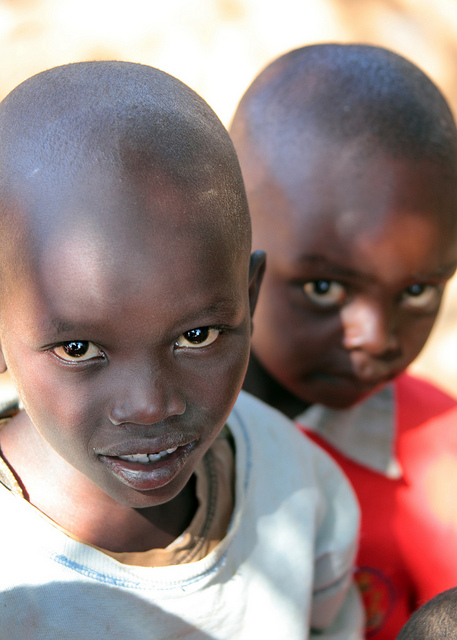 So far Zannah and I hadn’t managed to stray from Kenya’s well-established tourist trail – Masai Mara, Lake Nakuru, the coast.  But now, thanks to friends of Zannah’s parents, we were about to experience a side of the country not found in guidebooks.

Zannah was born in Nyeri, Kenya.  Her parents, who lived and worked in Kenya at the time, became friends with Gordon and Vanessa Murray, a Kenyan couple of European descent who managed a family-owned farm near the town of Nanyuki, northwest of Mt. Kenya.  Zannah’s parents left Kenya 30 years ago, but the two couples stayed in touch, and the Murrays – when they heard that Zannah would be traveling to Kenya – generously invited her to visit their farm (even if that also meant allowing some random American to tag along).

Zannah and I made the short flight from Nairobi to Nanyuki in a single-propeller, nine-passenger plane that stopped twice along the way.  As we approached our second stop, Samburu National Reserve, we could see rhinos and giraffes grazing in fields next to the landing strip, with the jagged peak of Mt. Kenya rising in the background.

Flying by Mt. Kenya (Video)
Vanessa met us at the Nanyuki airport and loaded us into her Toyota Land Cruiser for the drive to Lolomarik, the Murray’s 10,000-acre farm.  To my untrained ears, Vanessa’s accent sounded entirely English.  She rarely missed an opportunity to use the word “rather,” and she punctuated many of her comments with rhetorical questions.  When talking about a recent cricket match, for example, she said, “Those South African chaps gave the Indians rather a bit of a thrashing, didn’t they?”

A security guard raised Lolomarik’s front gate for us.  A dirt road took us past the primitive homes of some of the farm’s workers before crossing a line of trees and arriving at a beautiful single-level stone house surrounded by green grass, manicured bushes, and a tennis court.  The front porch faced Mt. Kenya.  In clear weather the mountain’s rocky summit appeared over the treetops.

Three friendly dogs ran out to greet us – Kipper, a small mixed-breed; Chalby, a yellow Lab; and Woody, a German Shepherd.  On the front lawn Vanessa introduced us to her daughter Tash and Tash’s friend Heather, both in their early 20s.  Tash and Heather were preoccupied at the moment because they were going to a caveman-themed party that night and weren’t feeling good about their costumes.  This was clearly a different Kenya than the one Zannah and I had seen so far.
A little later we met Vanessa’s brother Colin and his two children, Beth and Jens, who split their time between Colin’s home in Nairobi and the International School in Sweden, where their mother lives.  Colin, drink in hand, quick with a dry, world-weary quip about government corruption and inefficiency, might have walked right out of a Graham Greene novel.

Gordon drove up, welcomed us to the farm, and offered to give us a tour.  Lolomarik grew vegetables for many years, but a variety of factors shifted its focus to herbs – the familiar Simon and Garfunkel array of parsley, sage, rosemary, and thyme, along with several others.  The herbs are sold primarily to a wholesaler in the UK that then distributes them to local supermarket chains and other large retailers.  The herbs travel as cargo on a nightly British Airways flight and can be on store shelves a day or two after they’re cut, but at that particular moment a snowstorm had shut down Heathrow, causing a big headache for Gordon and the manager who handled his logistics.

Gordon showed us around the office, the herb-processing facility, and the fields.  Lolomarik employs about 400 people, down from a high of about 2,000 in years past.  Zannah and I rattled off a continuous string of questions and Gordon patiently answered every one – switching effortlessly from analyzing the big-picture forces that drive the industry to explaining the details of the specific growing techniques used with each different crop.  Large farms are amazingly complex operations.

I was surprised by the amount of trial-and-error involved.  The weather, soil, and altitude combine to make the environment at Lolomarik unique.  A technique that works at a neighbor’s farm might not work at Lolomarik.  The only way to find out what works best is to experiment.

After the tour, Gordon told us that Tash had talked him into flying her and Heather to their party that night.  The party was at a place called the Gin Palace on the edge of Lake Naivasha, four hours by car but only 35 minutes by air.  Gordon, who began flying in the 1970s, kept two planes at a landing strip right on the farm, and his larger plane could carry six people.  “Do you want to come along?” he asked me and Zannah.

We weren’t about to turn down a chance to fly over the Great Rift Valley in a private plane.  An hour later, Gordon, Tash, Heather, Zannah and I were rolling down the grass-covered runway.  Tash and Heather were happy to be flying instead of driving, but they still weren’t satisfied with their cavewoman outfits.

The views were incredible.  We crossed a small mountain range at pass called “the Saddle” and eventually reached Lake Naivasha, where thousands of flamingoes colored the edges of the lake pink.  We then experienced a situation that would be unfamiliar, I imagine, to most pilots in the United States:  Gordon spotted a group of warthogs on the tiny runway he wanted to use, so before landing he had to frighten them off with a low fly-by.
Landing by Lake Naivasha (Video)
On the way back (technically the fifth flight of the day for me and Zannah) we stayed low and tried to spot wildlife.  Gordon pointed out a training area used by the British Army, including a small replica of an Afghan village.  Flying over a small farm, Gordon tipped his wings in tribute to a pilot friend of his who crashed and died on that spot years ago.  He told us that another friend had recently been killed by an African buffalo.As we approached Lolomarik, Gordon warned us to hold on.  Vanessa and rest of the family had driven out to the top of a hill called Lookout Point, where we saw them perched on the edge of a cliff having drinks as the sun slowly dipped below the horizon, a long-time family tradition.  “I tell my sons not to do this,” Gordon said with a laugh as he flew straight at Lookout Point, waiting until the last moment before pulling up sharply.  Rather a bit of good fun, I say!

Gordon landed and drove us to Lookout Point.  Vanessa, Colin, Beth and Jens had been joined by Jamie (one of Vanessa and Gordon’s two sons), Jamie’s wife Danni, and Danni’s mom Christine, who was visiting from England.  The view was beautiful.  We drank wine and Tusker as the sun set on what had been a very interesting, entertaining day.

It was impossible, in that environment, to avoid thinking about inequality and skin color.  Every time we left the oasis of the Murrays’ modern house we immediately passed a cluster of dirty shacks that housed some of their workers, and over a fence the faces of black children peered at the white faces driving by in luxury SUVs.  Black Kenyans prepare the Murrays’ food, clean their house, feed their dogs, mow their lawn, maintain their tennis court, and wash their cars.

But are the Murrays doing something wrong?  They run their farm efficiently, creating hundreds of highly sought-after jobs in a country where the unemployment rate is 40%.  By Kenyan standards their workers are treated and paid very well.  The Murrays, who speak Kiswahili, are heavily involved in the community.  They support local schools with their time and money.  They sponsor promising students, sometimes paying for their entire education.  Gordon volunteers on a local water board that helps area farmers manage a critical (and controversial) shared resource.  What else should they be doing?

This was my first experience with the descendents of colonial settlers in Africa.  It’s a fascinating situation.  What is it like to be born in Kenya and consider yourself a Kenyan, but at the same time to have white skin and be culturally more British than Swahili?

When tribal violence swept Kenya after the 2007 elections, killing more than 800 people and leaving 600,000 displaced, the homes and businesses of Asian (primarily Indian) Kenyans were especially hard-hit.  Asian Kenyans who had lived in the country for generations suddenly realized that they were still considered outsiders.  How awful must it be to feel unwelcome in your own country?  It sounds as if there’s not nearly as much resentment towards white Kenyans, but the us/them dynamic is dangerous and volatile.  If you were a white Kenyan, wouldn’t you worry the fault line might shift before the next big shake?