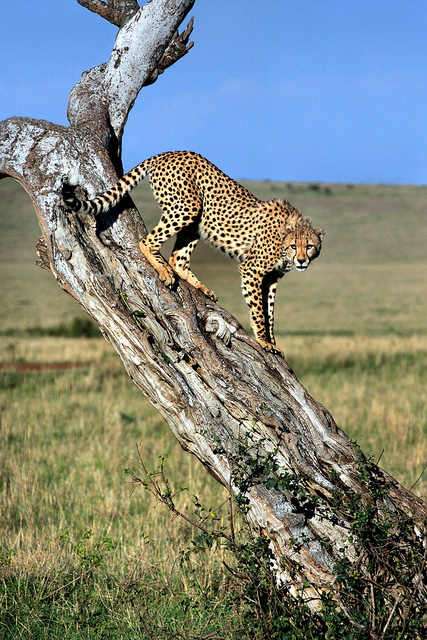 Our second day in the Masai Mara began inauspiciously.  I woke up early to take a shower, only to find the water in the bathroom was a disconcerting shade of dark yellow.  And also ice cold.  I decided a shower could wait.

The previous night Zannah and I had been introduced to Steve, our guide for the rest of the safari.  Steve told us we would start out with a few other tourists, but by mid-morning Zannah and I would have the safari van all to ourselves.  Normally that would have been great news, but we liked the Kenyan couple, Liz and Alex, who began the day with us, and wished they could have stayed.

We entered the park just as the sun began to rise, and almost immediately Steve spotted two male lions walking across the plain.  “The Artur Brothers!” cried Liz.  The Artur Brothers are two flamboyant eastern European mercenaries who were involved in some very sketchy operations widely believed to have been orchestrated by Kenya’s government.  Liz explained that the two lions were in fact brothers, they always traveled together, and they’d been named by the guides after the notorious mercenaries.

Artur Brother Walking at Dawn (Video)
We went directly from the Artur Brothers to my favorite animal sighting of the entire safari:  three cheetahs in a tree.  Steve told us they were young brothers that had been left by their mother only a few days ago.  We watched the trio climb down from their perch, stop for a quick drink, and then take off across the plain.
We made a quick stop at a lodge to drop off Liz, Alex and another tourist, and from that point on Zannah and I were Steve’s only passengers.  At mid-morning we drove up right next to a large group of elephants.  One of the large males came so close to our van that if it reached out its trunk we could have touched it.  At one point the large male turned directly towards us.  Zannah reacted by sliding backwards in the van, sending Steve into a fit of laughter.  “Where were you planning to go?” he asked.  “You are in a car!”
Elephant Close Encounter (Video)
We drove on and suddenly Steve swerved, almost knocking us down.  Somehow he’d spotted a small green chameleon in the road and just missed it by inches.  Zannah I and got out to take a closer look.  The poor little guy was literally shaking with fright.
At mid-day we arrived at the Mara River, close to the border with Tanzania (pronounced tan-ZAN-ee-uh by Kenyans, which sounded enough like tan-ZANNAH-ee-uh that it became Zannah’s preferred pronunciation).  Huge herds of wildebeest cross the river every summer in the largest mass migration of animals in the world, but it was relatively quiet this time of year.  Steve pointed out big groups of mostly-submerged hippos and lone crocodiles sunning themselves along the riverbank.
We stumbled across a hippo out of the water, something Steve said is very rare.  Hippos usually spend all day in the water and only come out to graze at night.
It was time to stop for lunch.  Steve parked the van in the shade of an Acacia tree and gave us sack lunches to eat on the grass.  A herd of topi grazed nearby, guarded by a sentry that kept an eye out for predators from the top of a small mound of dirt.
On the drive back towards the park entrance we came across two different lion prides lounging in the shade, a large number of cubs and young adults in both groups.  We were able to get very close, prompting nothing more than an occasional bored glance from the sleepy cats.
What a great day at the park.  Back at our lodge, Zannah made the double-T hand signal we’d started using to indicate the arrival of Tusker Time, and we ordered a round of (warm, unfortunately) Tusker beers.
Early the next morning we headed into the park again for our last visit.  There were lions everywhere.  A group of cubs in the soft morning light, a young male posing regally at the top of a hillock, a male and female couple flirting as they walked.  There were so many I lost count.
Lion Walking by a Safari Van (Video)
Back at the lodge we ate breakfast and packed our bags.  Before leaving we heard a buzzing sound from the back of the dining hall and noticed a swarm of bees gathering under the ledge of the roof.  I apparently approached too close, which led Steve to casually mention to Zannah, “He should fear the bees,” a warning that might have been helpful if it had been passed along before I blundered into the swarm.
Bees Swarming in the Masai Mara (Video)
I hated to leave the park and could have happily spent much more time there.