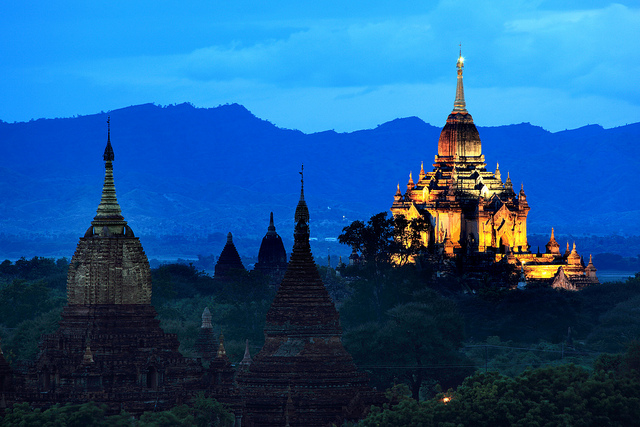 Without getting out of bed, I knew from the sound of rain outside my window that the sunrise on my second morning in Bagan would be washed out.  Once again Tim and I hired Uncle Ko San to pick us up at 8:30am.  I just wanted a ride to Nyaung U, where I planned to check into a different hotel.  Tim and Ko San dropped me off there and went back for another round at the temples.
After checking into my hotel I intended to rent a bicycle as soon as the rain stopped.  But the rain never stopped – wet, gray skies from noon until dark.  After dinner I rented a bike anyway so I could ride out before sunrise the next morning.

Another pre-dawn wake-up, another rained-out morning.  I didn’t know it at the time, but all of Southeast Asia was being hit by a series of storms, including Typhoon Megi and Cyclone Giri, which hit Myanmar on 10/22.  The rain started to let up around 8am, so I set out towards Pya-tha-da, an interesting-looking pagoda we’d missed the day before.  I had the benefit of relatively smooth pavement for the first half of my ride, but eventually I needed to turn onto a dirt road.  A few locals saw me eyeing the turn-off.  “Road broken,” one of them said.  “No go.”  The fact that they told me not to go made me determined to try.

Stubborn, stupid move.  I thought if the road became too muddy I could just turn around.  But I got caught in the “boiling frog” effect – at no point did the mud increase dramatically, but the road incrementally deteriorated until I found myself floundering in a boggy mess.  I had to get off the bike and walk.  My feet sank in thick mud that rose over my ankles.  With every step I risked losing a sandal.  Finally accepting defeat, I abandoned my intended path and turned towards the paved road.  By the time I got back to solid ground my bike and I were caked in mud.  A passing Burmese woman took pity and helped me use water from a puddle to wash off the bike, but our cleaning revealed another problem:  two flat tires.

At that point it crossed the line from frustrating to funny.  Wet, muddy, and humbled, I started walking my bike back towards the store where I rented it.  That meant I needed to pass the guys who had advised me to avoid the muddy road.  “I told you!” one of them shouted when he saw me shuffling towards them.

“You were right,” I admitted, gritting my teeth as the group had a good laugh.  “I should have listened!”

After savoring their moment, two of the guys volunteered to patch the flat tires.  I considered just walking the bike back to the rental shop, but they said they’d fix it for only $1 and I was curious to see how the patching operation would work.

The well-worn tires were already dotted with patches, and the repair turned out to be a lot more involved than any of us anticipated.  Somehow I’d managed to put five holes in the front tire and six in the back.  The two young guys who initially helped me gave way to an older man who spent almost an hour applying and diligently testing the patches.  Eventually the bike was good to go, and I promised to stay on roads that weren’t “broken.”

As we worked on the bike, one of the young guys, Khaing Myo San, pointed out a nearby temple that had a good view for sunset photos, so I biked there after returning to the hotel for a quick shower.  At the top of the temple I found Khaing trying to sell sand paintings.  He may have had ulterior motives when he recommended the spot, but he was right about the view.  Clouds blocked the sunset yet again, but the sky eventually picked up a little bit of late color.  Khaing, playing with my iPhone as I took sunset photos, was disappointed that I didn’t have any Scorpion songs.  He reacted less-than-enthusiastically when I had him try The National and TV on the Radio instead.

Khaing directed my attention to one of the temples on the horizon and said it contained a Buddha relic.  I asked him what kind of relic.  “Tooth,” he said, smiling.  “Buddha teeth in very many temples…  Sometimes I think, how many teeth Buddha have?”  We both laughed.

As I packed up to leave, Khaing invited me to eat at his house in the Wet Kyi Inn Village, southwest of Nyaung U.  I gladly accepted and we decided the best time would be lunch tomorrow.  Clouds and rain ruined the sunrise again the next morning, but by mid-day the rain had stopped and I headed out to meet Khaing at a store near his village.

Khaing led me through a maze of muddy side streets to his bamboo and thatch house.  He introduced me to his two younger sisters, his father, and his mother, who had already prepared lunch – white rice with plates of tofu, spicy mushrooms, Morning Glory, mixed vegetables, and fried egg.  But only two places were set at the table.  “Isn’t the rest of your family going to eat with us?” I asked.  Apparently not – Khaing made a vague reference to a Buddhist custom that apparently required the two of us to eat first.  The rest of the family sat Indian-style around the low table and stared at me while I ate, chuckling every time I did something awkward.  They chuckled a lot.
After lunch Khaing suggested that we walk to the Ayeyarwaddy River, only about 100 meters from his house.  On the narrow path to the river I stopped to pet a dog that was wagging its tail.  The minute my hand neared the dog’s face it snarled and snapped at me, very nearly breaking the skin on my hand.  Close call!  I wasn’t thrilled about the idea of beginning rabies treatment.

At the river I took out my camera for a photo, and as I brought it up to my face the eight-pound lens dropped completely off the camera body and fell straight towards the rocks at my feet.  The world began moving in slow motion.  I instinctively lifted my right leg forward to slow the lens’ fall, and blood appeared in the two places it hit, first under my knee and then just above my ankle.  I felt sick to my stomach as I saw the lens skid on the rocks.  Khaing pounced on it as fast as he could.  I cleaned off the lens and reattached it, holding my breath.  It still worked.  The world returned to normal speed.  Another close call!

Walking back from the river Khaing and I heard a rustle by our feet and turned to see a large brown snake slither under some leaves.  “Dangerous?” I asked Khaing.

“This sure is a fun walk,” I told Khaing.  Within the space of 10 minutes I’d had a rabies scare, almost smashed the one piece of equipment that would be the most difficult and expensive for me to replace, and walked right past a deadly snake.  On the bright side, Khaing led us to a temple with an unusual two-headed Buddha (the second head is in the Buddha’s stomach).

I retreated to my hotel room and hoped the clouds would clear in time for sunset.  No luck, but I decided to go back to Shwe-san-daw Paya anyway to photograph the temples that are lit up at night.  I took a few shots as the sky darkened, but – just as the light from the sky and temples began to reach the perfect balance – Bagan’s power failed.  All the temples went black.  I had to laugh as I climbed back down the steep stairs.
I set my alarm for 5am the next morning, not feeling optimistic about the chances for a clear sky.  A loud storm woke me up several times during the night, and when my alarm went off the rain was still pouring down.  Broken tree branches covered the ground and the street in front of the hotel was mostly underwater.  At about 10am the power went out.

My bus to Yangon was scheduled to leave that afternoon and I began to wonder if it would be cancelled.  In the hotel lobby I talked to a tourist who said she was just on a bus that had to turn back because of a fallen tree in the road.  Surprisingly, my bus decided to give it a go.  We left as scheduled at 4:00 that afternoon.

One thought on “Bagan, Myanmar, Part 2”