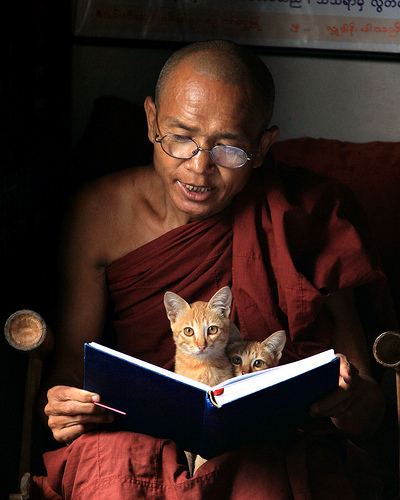 The pick-up truck from Shwenyaung junction dropped me off in front of the Nyuangshwe guest house I’d chosen, and – despite the fact that it was 6am – a cheerful receptionist checked me in and showed me to my room.  I briefly considered catching a few hours of sleep, but a second wind sent me right back out for photos in the early morning light.
After breakfast and a short nap I started to leave the hotel again when the manager – described by my guidebook as someone “who looks exactly as you’d imagine a Shan Princess” – called me over to ask if I wanted to make any tour arrangements.  She told me that the big Phaung Daw U festival (sometimes spelled Phaung Daw Oo) was underway and the best day to watch the celebrations on the water would be the day after tomorrow.  Based on her advice I decided to rent a bike that afternoon, go trekking the next day, and then hire a boat on my third day.  But before making any definite plans I wanted to get another opinion, so I walked towards Nyaungshwe’s main drag to look for a travel office.

A restaurant called the Smiling Moon caught my eye and I stopped for lunch.  Almost immediately a pretty Burmese woman appeared from a back room and introduced herself as Thandar.  “May I sit with you?” she asked in very good English.  I said of course, and as she pulled up a chair she explained that she and her mother owned the restaurant.  “Where you from?” Thandar asked.  When I told her I was from the United States she gave a little cheer.  “My sister live in New York!”

About nine years ago Thandar’s sister (who was living in Yangon at the time) met an American attorney who worked for the U.S. embassy.  They married two years later and settled in New York City, which must have been an interesting transition for Thandar’s sister.  “You from the United States, you like family,” Thandar told me with a serious look on her face.

I asked if many Americans came through Nyuangshwe.  “No,” Thandar said.  “Mostly Spanish.  But now not many tourists.”  The tourist drop-off leading up to the 11/7 elections meant that businesses like the Smiling Moon would have a lean stretch.

I ran my plan for the next three days passed Thandar.  She gave the thumbs-up and confirmed that Thursday (10/14) was the best day to be out on the water.  “You book already?” she asked.  I told her I hadn’t finalized anything yet but might book through my hotel, which I named.  Thandar and the waiter standing next to her started laughing.  Apparently the Shan Princess has a reputation around town.  With tourists she tends to be pushy and controlling, and with the locals she tends to be downright mean.  The other business owners are afraid of her.  “If you want,” Thandar told me, “I can make arrangements for you.”  I liked her better than the Princess and the prices she quoted were lower, so I took her up on the offer.

An hour later I was peddling towards Inle Lake on a single-speed bicycle with a basket on the front.  Just picture Julia Roberts in the Eat, Pray, Love movie trailer as she rides a bike in Indonesia with her big, toothy grin, and then substitute my face for Julia’s and Myanmar for Indonesia.  Most of the people I passed seemed amused by the goofy foreigner on the bike, and almost all of the kids waved and said hello.

One of the dynamics of extended travel that’s both great and painful is the fact that I’m always an idiot.  Every time I arrive in a new country or city I’m a rookie again, and I inevitably make a string of rookie mistakes.  Passing a group of workmen as I peddled towards Inle Lake that afternoon, for instance, I yelled “Thanks!” in Burmese (“Che-zu-beh!”) instead of “Hello!” (the fun-to-say “Min-gala-ba!”).  The workmen looked confused for a second before laughing at the mentally challenged bicycler.  I then proceeded to get lost twice before finally stumbling across the road that runs down the west side of the lake.  I took that road all the way to the town of Kaungdaing, where I stopped for a drink and turned around.

On the way back to Nyaungshwe a rainbow formed in the late afternoon light.
Back at the hotel I ate dinner and collapsed.  I didn’t even wake up the next morning for sunrise photos.  I slept so late, in fact, I had to hurry to meet my trekking guide at 8:30am.  We’d agreed to meet at an intersection down the street from the Smiling Moon, because the horsecart driver who was picking us up was too scared of the Shan Princess to come to my hotel.

The horsecart driver took me and my guide, Nge Lay (pronounced quickly it almost sounds like “Nelly”), a couple of kilometers towards the mountains that run along the east side of Inle Lake.  At that point the road stopped and we began our hike uphill towards Loi Kaw, Nge Lay’s village.  His village and most of the surrounding area are populated by the Pa-O, one of Myanmar’s tribal minorities.

Our first two stops were at caves that contain old Buddha statues.  A monastery had been built next to the second cave, and in one of the rooms we passed an older monk who was chanting prayers from a large book.  Right after I started taking photos of the monk, two kittens popped up from his lap to investigate the source of the strange clicking sound.

Nge Lay and I talked as we climbed towards his village.  He was 20 years old and had been dating the same girl since he was 16.  He wanted to marry her but said that first he needed to save enough money for the wedding celebration, which would cost at least $400.  The Smiling Moon – where he’d been working for four years – paid him only $15 a month (in addition to room and board), so saving $400 would take a while.

When I asked about music, Nge Lay said his favorite artists are The Eagles, Scorpion, and Shakira (almost every young person in Myanmar at the time seemed to love Shakira’s song Waka Waka, the official anthem of the 2010 World Cup).   I still can’t get over Southeast Asia’s unusual taste in Western music.  In Vietnam, Laos, Cambodia, and now even Myanmar, the band that almost always gets mentioned as a favorite is Scorpion.  Scorpion?  Really?  I felt terrible every time I had to break it to someone that my iPod doesn’t even have a single Scorpion song (something I planned to remedy the next time I had a fast Internet connection).

When we reached Nge Lay’s family’s house he started the tour by showing me the tobacco leaf drying operation on the ground floor.  The leaves are pressed flat and dried over a narrow, 10-foot long fireplace trench dug into the ground.  When the leaves are dry, they’re packaged up into 50-kilogram bundles the family hauls into town on an oxcart and sells for about $50.

The upper floor of the house, made from bamboo, wood and thatch, was spacious enough for a kitchen, a family room, and a separate bedroom.  Nge Lay introduced me to his sister, who was just starting to cook us lunch, and his niece.  The food was excellent.

On the hike back down to Nyaungshwe we passed an older Pa-O man who had so much character in his face that I had to stop and ask to take his photo.  Nge Lay translated my request and the man laughed and nodded.  After I took a few shots the man squatted down beside us on the path and said something to Nge Lay, who turned to me and asked, “You have money?”  I felt a little disappointed, assuming the Pa-O man wanted to be paid for letting me take his photo.  But Nge Lay clarified, “You have American money?  He never see before.  Just want to see.”  The man had never seen U.S. dollars and was just curious to know what they looked like.  I handed him a $1 and $5 bill.  A look of wonder appeared on his face as he carefully examined each bill, even bringing them up to his nose to smell them.  As we talked with the Pa-O man other villagers stopped to join us, and I took a quick video of the crowd that gathered.
Crowd around Pa-O Grandfather (Video)
I left the $1 bill with the Pa-O man, and later Nge Lay told me the man said he planned to donate the dollar to a pagoda while saying a prayer in my name (so I have that going for me, which is nice.)  The Pa-O man apparently also invited us to tea at his house, either that day or the next, but Nge Lay didn’t bother to mention that until my last day in Nyaungshwe.
Back at the Smiling Moon in the late afternoon Nge Lay and I hung out with Thandar, her nieces, and their two puppies.  Two monks, friends of Thandar, entertained themselves with my iPhone.
I tried to buy Nge Lay a beer, but he declined.  “You don’t like beer?” I asked him.

“No, I like,” he said with an embarrassed grin.  “I like too much.”  Thandar jumped in and told me that four years ago Nge Lay had so much to drink he was taken to the hospital and nearly died.  Since then he’s been on the wagon.  Nge Lay said his older brother actually did die after a drinking binge.  “He drink too much and sleep outside with no blanket.  When he wake up, he die.”

Before I went back to my hotel Thandar introduced me to BD, the boat driver who would be taking me out on Inle Lake the next day.  BD flashed a huge betel-stained grin as he shook my hand.  His English was terrible and I hardly understood a word he said, but he seemed like such a good-natured character I already liked him.  Thandar said BD would meet me the next morning about a block away from my hotel because he, too, was scared of the Shan Princess.