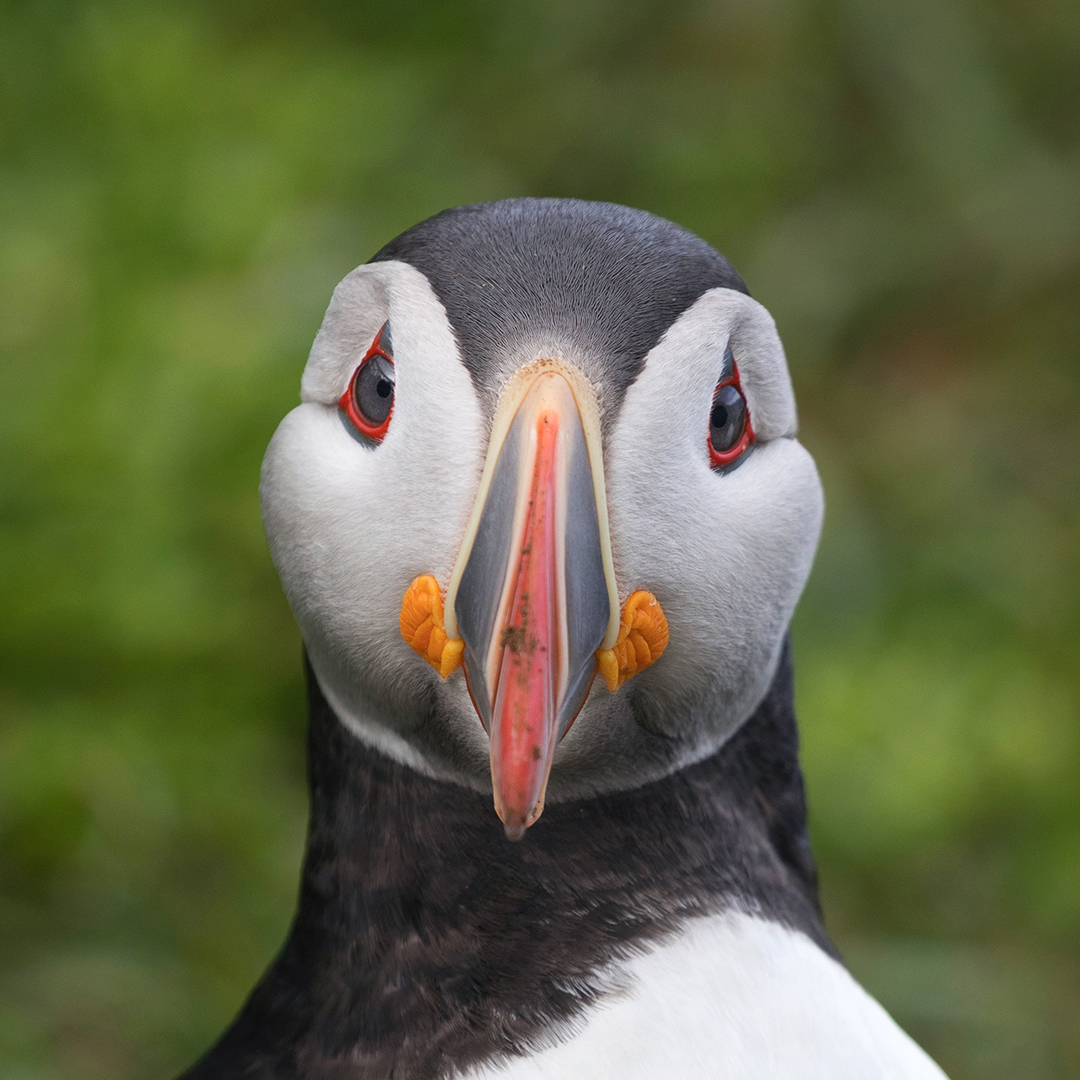 Rain clouds followed us from Jokulsarlon to Seyðisfjörður, a quaint fishing village on Iceland’s east coast where we spent the night before making a side trip to see the puffin colony at Borgarfjarðarhöfn.  I’d only been able to photograph puffins a couple of times in my life, and only from a distance, so being able to see them up-close was special.  Apparently about 10,000 pairs of puffins nest at Borgarfjarðarhöfn every summer, and there’s a wooden boardwalk that lets you walk right through the heart of the colony.

The puffins seemed totally unconcerned by our presence, and it was fascinating to watch them working on their nests, interacting with each other, and flying off over the ocean.  We spent about two hours at the colony and I would have been happy photographing the colorful, strangely awkward puffins all day.

From Borgarfjarðarhöfn Marie and I drove on to Hverir, a geothermal area right next to Lake Myvatn.  Hverir reminded us of Yellowstone’s mudpools and fumaroles, but on a smaller scale and with a noticeably different edge to its intense sulfuric odor.  On the way to Hverir we branched off on a rough side road to check out Dettifoss – supposedly Europe’s first or second “most powerful” waterfall – but the area was covered in such heavy fog that we could hardly even see the falls.

I still felt guilty for hitting a bird on the highway near Jokulsarlon, and as we drove along the Ring Road we had several near-misses.  The birds in Iceland seemed determined to get in front of our car.  Some of them just planted themselves in the middle of the road, and others dove at us so dangerously close that I had to slam on the brakes for fear of inflicting another casualty.

We spent the night by Lake Myvatn and then made the short drive to Godafoss – the “Waterfall of the Gods” – before continuing on to Kirkjufell, where we stayed at a guesthouse near the area’s famously scenic waterfall.  Persistent rain prevented me from photographing Kirkufellfoss that evening, but the clouds briefly relented at about 5am the next morning.

That same morning Marie received a startling text from her son Aidan, who was staying at our place in Silver Gate, Montana:  “We might flood,” Aidan wrote, along with a photo of Soda Butte Creek spilling over its banks by our deck.  News began trickling in that our area was experiencing an extreme flooding event, worse than anything long-time residents had ever seen, and one that nobody seemed to have predicted.  Homes were flooding and roads and bridges were being washed away.  It was a strange, helpless feeling to be so far away from home while such a calamitous event played out.

The water reached its peak that night.  Our place stayed dry, but many sections of the road from Silver Gate to Gardiner (through Yellowstone) were completely destroyed.  Full repairs will take years, apparently, but the park is hoping to have temporary fixes in place before winter.

Preoccupied by news of the flooding, we returned to our Ring Road starting point – Reykjavik – and spent the following morning driving the Golden Circle loop that includes Þingvellir (a national park), Geysir (the geyser that gave us the word “geyser”), and Gullfoss (one of Iceland’s most unique and impressive waterfalls).  Rain put a damper on photo opportunities and reminded us of the flooding at home, but still we enjoyed the drive.

Later that day we said goodbye to our rental car at the airport and checked in for our flight to Nuuk, Greenland, which was scheduled to leave that evening.  As we were walking to our gate, Marie stopped abruptly in front of a monitor.  “That’s not our flight, is it?” she asked, pointing to red text that said CANCELLED.  Yep, that was our flight.

Everyone finds it boring to hear the details of other people’s travel setbacks, so I’ll try to briefly summarize the way that single cancellation threw a wrench in our plans.  Despite frantic effort and some frustrating near-misses, we couldn’t cobble together another way to get to Nuuk in time to catch the ferry we’d planned to take to Ilulissat, a smaller town up Greenland’s west coast.  The best option we could find – and by that point we were very grateful to find it – was a direct Icelandair flight to Ilulissat that would get us there a day earlier than we would have on the ferry.  It meant we’d miss two of the three big parts of our Greenland trip (Nuuk and the ferry ride), but we’d at least get to check out Ilulissat, which looked like a incredible place.

“I hate to even mention this,” I said to Marie, “But is it possible that when I hit that bird by Jokulsarlon I brought some kind of bird-curse down on us?”

Marie’s eyes widened.  “Oh $#!%, that makes sense!”  Since the unfortunate demise of that lethargic bird, Marie took a spill that sliced open her hand, the weather had been mostly awful, our home experienced a 1,000-year flood, and our trip to Greenland had been gutted.  What else do the birds have in store for us, we wondered, and what can be done to mitigate their wrath?

After three interminable nights in purgatory (actually a pretty nice hotel in Keflavik, with room and board covered by the airline) we headed back to the airport for another try at reaching Greenland.  “They might not let you board with that,” said the Icelandair representative when she looked at my small rolling bag.  We’d be on a prop plane with limited overhead space, so I agreed to check it, even though the representative wasn’t insisting.  Little did I know I’d just made a critical mistake (and that somewhere, the gleeful ka-kaw of a sinister Icelandic bird echoed in the air).

Our flight to Ilulissat was delayed – further jolting our already-frazzled nerves – but it did eventually take off.  We were excited to see Greenland, and we hoped that by moving on to a different country we’d be escaping any additional carnage from the terrible curse the vengeful birds of Iceland had chosen to inflict upon us.